When you are managing your garden, you need to manage it and not just hope that things will happen.
If not then your garden will die.

When you are managing your business, you have to be the leader.
Same as in the garden you have to look manage those things that could adversely affect your business and ACT to fix them.
I found this information from the CEO of Intuit in the USA as he looked at four major lessons that are as relevant today as they were more than a century ago, during the historical battle of Gettysburg.
1) Commanders Intent
In a V-U-C-A world (volatile, uncertain, complex and ambiguous), a leader must provide clarity, while avoiding intellectual certainty. In our company, we describe this as being clear about the “what”, but delegating and empowering teams to figure out the “how.” A commander’s intent serves as the grand challenge, to inspire the hearts and minds of the team and to catalyse their best thinking. It defines the goal, or definition of success to be delivered.
In the famous battle for Little Roundtop, Joshua Chamberlain and his 20 Maine was simply told that he represented the left flank of the Union army. His orders were to avoid moving backwards (e.g., retreat), or the entire Union army would be swarmed. How he chose to achieve that objective was his for the making.
If you've read the book (Killer Angels) or watched the movie (Gettysburg), you know that Chamberlain initially succeeded in repelling the charging Alabamans as they attacked multiple times, but than his ammunition ran out. Faced with this situation, he gave the command to “fix bayonets” and charge in a manner that had never been tested before. It worked. Chamberlain and his team understood the commander’s intent, and innovated in the heat of the moment to make it a reality.
For leaders, the lesson is simple: clearly state what the desired outcome should be, and then empower the team to deliver in the best way possible. It worked 150 years ago, and it still works today!
2) Situational Leadership
This long-held truism was never more apparent than walking the field of Gettysburg. As you learn more about the track record and skills of the respective leaders, you come to appreciate that even the most gifted of leaders can be felled if they do not adjust their style to the players involved, or the situation at hand. 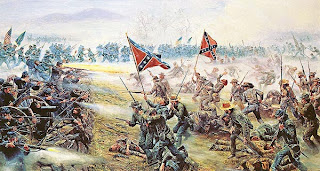 One specific example was the differing approaches of the two commanders at Gettysburg, General George Meade for the Union and General Robert E. Lee for the Confederates. Meade had taken command a few days prior to the battle, was not a popular leader, and was disliked by many of his direct reports. Instead of developing a single master plan for the Union army, Meade convened regular check-ins of his leadership group, sought their best ideas and developed a shared vision for how to react to the new information. Throughout the day, Meade would ride up and down the front, asking his leaders if there was anything they needed, and worked to remove barriers that could prevent their success. In this situation, he chose to “lead through his men.”
Lee was a living legend, loved by his men, and acknowledged as a military genius by both sides. Lee had proven to be wily, resilient and instinctive in his decision-making. Yet he had grown accustomed to having his two strong commanders: Stonewall Jackson, of whom Lee once said “I need only to conceive it, and Jackson will make it so;” and James Longstreet, a realist and progressive thinker who thought of the battlefield in the context of chess, and not checkers. These two war horse generals enabled Lee to design a plan, and then delegate the successful execution to their doing. Unfortunately, Jackson had died in the weeks preceding Gettysburg, and his replacements were not as seasoned or aligned with Lee’s intent. Lee was also accustomed to seizing the best ground upon which to fight (the high ground), which was not the case at Gettysburg as the Union army seized the best positions on day one.
In an uncharacteristic manner (some would say born out of desperation), it is said that Lee did not adjust his leadership approach to this new reality. He issued only two orders over the course of the three day battle, and without the benefit of his cavalry (as Jeb Stuart strayed from his primary duty of being the eyes and ears of the army), the Confederate army was defeated at the battle of Gettysburg.
Now for those who know the history, there is much more to what occurred than this simple synopsis, but historians agree that Meade, the less known of the two generals, did a better job of adapting to the changing battlefield. Leaders must adjust their leadership approach to the situation at hand, and the individuals they are leading. One size does not fit all.
3) Discovery Driven Planning
In the military, it is often stated that a plan is only valid until the enemy is engaged, at which point you must begin to improvise and adjust. A companion to this principle is “the map is not the terrain” (or said in business terms – the spreadsheet or the Power Point slide is not a guarantee a plan will work).
At Gettysburg, there were multiple aspects to Pickett’s Charge that had to work in unison for the South to have prevailed. Two simultaneous flanking attacks (that ended up occurring hours apart), a surprise attack of Stuart’s cavalry from the rear (which was thwarted by a young Union officer by the name of George Armstrong Custer), and a pounding of the Union artillery by a Confederate bombardment (most of which over-shot and missed the target), all planned to take place before Pickett led his men across an open field. None of these other elements of the attack worked as planned, but without real-time feedback and adjustment the South continued forward as planned.
To complicate the scenario even further, the view of the terrain for Pickett's Charge from the 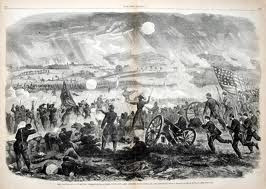 Confederate’s perspective leaves you feeling the task is doable. Yet as you walk the actual path these men took for one mile in the sweltering heat up a gradually inclining terrain, you realise in hindsight that it was quite the opposite. In the end, over 12,000 men advanced in Pickett’s Charge, and roughly 300 made it to the other side.

The leadership lesson: a plan is a hypothesis that must be adjusted as new information is learned, commonly referred to as discovery-driven planning.
4) Seeking to Build Durable Advantage
At Gettysburg, two key elements – seizing the high ground and superior technology – presented sizable durable advantages that neither great leadership nor valiant effort could offset.
John Buford and his few hundred Union cavalry men arrived early and secured the high ground at Gettysburg. Through the advantage of their elevated position, they were able to successfully hold off superior forces. They were helped by their new breach-loading rifles that fired a half dozen rounds a minute, contrasted with the Confederate muskets that fired only two rounds per minute. These two advantages mitigated superior forces, and allowed them to hold the crucial high ground until more Union forces could arrive.
In business, it is important to seek a source of durable competitive advantage. These sources are so strong that even great execution from your best competitors cannot offset their advantage. Powerful examples include the presence of a network effect; fixed cost leverage; a fundamental business process advantage; or access to a scarce resource, just to name a few. What matters is seeking and cultivating these advantages as you develop your business plans.
Gettysburg served as a powerful reminder of the valuable lessons that should be understood and applied for today’s leaders, look to see how these lessons from the past can assist you in the development of your skills and your business.

At the final count it is up to you as the leader - to lead.

It will not come out of the clouds, your mother will not hold your hand - its down to you, and its scary.

At times you may need some help - at these times call out for support, that is you being a leader as well.

PS    Contact me to assist you to develop your leadership style. tony@businessgardener.com.au